Standing On The Promises Of God - Remnant Moles, Pay Attention 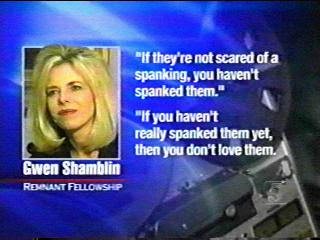 The cultic movement Remnant Fellowship has had a long standing objection with my assessments of their religion, culture and leadership as being cultic, antichristian, abusive and manipulative. That is fully understandable when one realizes that spiritual darkness hates it when Biblical light is being shed on it. Their contentions with me over the past years are as legion as the devils that I believe infest their fellowship, as are the conflicts many other cults passionately commit themselves to in efforts to silence dissent and intimidate those who would call them to account. For a bit of information on some of these, check out this link and this link.

My point here is simply that my struggle is far from being the only one. Cults across the nation are suing those who have criticized them with litigation in many another court room.

It is silence on their evil doings that enables cults to achieve the societal disruption and spiritual deception they wreak .. with the church herself being their chief target. We've said it here before and will say it again: Jesus said it would be this way:


For there shall arise false Christs, and false prophets, and shall shew great signs and wonders; insomuch that, if it were possible, they shall deceive the very elect. Behold, I have told you before. Wherefore if they shall say unto you, Behold, he is in the desert; go not forth: behold, he is in the secret chambers; believe it not.

The Biblical prophecy made here by Jesus Christ Himself is being fulfilled by this cult's very existance and heretical mission. I have found that, unless it directly affects them, however, most people don't care much about these kinds of divine oracles found in God's Word unless its bagged up and processed in some nice neat way to help them prosper or succeed or feel good about themselves. But that's for another post for another time.

That thought always moves me to wonder where all the big mega preachers and religious movers and shakers who abide in Nashville have been during the ascendancy of this cult in their own backyard. Where were all of the silver tongued and fiery day prophets for truth who posture in their element there while Shamblin's Remnant Fellowship and other cults there locally devour those wandering out their back doors? Why does it take a mutt Pentecostal preacher of no standing or church pedigree to be the one to take this stand for truth to the antichrists who Jesus said would come to destroy the flocks of God? Why do I get the tens of thousands of dollars of legal bills while Nashville's pulpit ministry media budgets spend that in barely minutes of air time for yet another banal series about purely church-related issues?

Why? Because God raised us up to stand for truth.

Spiritwatch Ministries is devoted to speaking the truth in love to those who will receive it and to those who do not. And one thing is for sure: I won't be one of those that cults or false teachers mute and we shall not remain silent in exposing the darkness of this present age and if Shamblin et al have chosen to identify what the blacklight of their deception, then they will remain a subject for examination and discernment according to the Scriptures for the defense and proclaiming of the truth of the Christian Faith they choose to distort, pervert and deny.

Say what you will, but God has always told me, personally and verbally, in every time I grapple with error that destroys lives the same words:

And He has sustained me time and again in every battle for His truth that I have joined with and is why I have no fear of man anywhere concerning standing up for it. My freedom of thought, mind, speech and heart will never bow to the tyranny of those who seek to shackle and crush it, much less that which is used to destroy and deceive souls.

So when the continuing efforts by the Remnant cult's leaders Gwen Shamblin and Tedd Anger to intimidate me into silence about their antichristian doings failed again, this time in their fatally flawed attempt in a Tennessee appeals court to overturn the summary judgment I won against them, all I can do now here is smile .. and pray, as well as thank God for my lawyers Phil Anderson and John Belcher and the excellent upholding of First Amendment law in the court decision. Free speech is still alive in Tennessee.

For my God spoke the same thing to me when my lawyer phoned me with the news on the ruling this past week. I stand for the truth as it's known about this odious and toxic sect and both He and the truth have been my defense.

I don't know about the "god" Shamblin and Anger idolatrously serve, but my God lives. His truth is marching on as more of it comes out.
Posted by Reverend Rafael at 12:13 AM No comments: