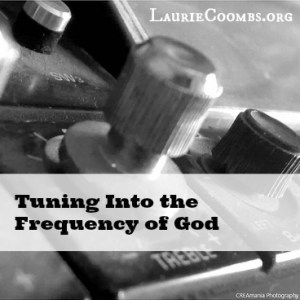 We've been doing some long overdue review of our research library we've built about the Word of Faith movement and have watched a lot of some of the most looney stuff you can ever imagine. As a Pentecostal, it turns my stomach .. as a Christian, it breaks my heart .. to see and hear other professing Christian "anointed" teaching so much error, bad doctrine and living such carnal lives filled with any kind of spirit but the Holy One.

Over and over, we'd listen to people like Jesse DuPlantis, Kenneth Copeland and a host of others blab out in the middle of their typically manic-driven deliveries that they'd had a conversation with God at least as familiar as a conversation you might have with the mailman at Denny's. DuPlantis, in one sermon in our video library, was told by God that He had his own favorite verse in the Bible the same way everyone else does. And the crowd in the TBN soundstage lapped it up like it was manna from on High. Eck. Gag me with angel dust.


The notion that God speaks to us isn't a problem. Unlike the scoffing and/or skepticism of those who don't believe in a vocal Divinity who does speak to us, Christians can and should seek to hear God speaking to them as they seek direction, guidance and encouragement. It's where the conversations lead and how they're supposedly held that becomes the BIG problem. Here's a great article I also dug out while researching on the net that highlights the issue of a voice from heaven that becomes as ordinary as the voice of your BP clerk .. Below is a sample:


When God's Voice Is Common

The Bible says God speaks in a “still, small voice,” but that voice no longer seems to be still or small if you listen to contemporary pastors. The phrase “God told me” is becoming one of their favorite expressions. So many seem to be on speaking terms with God.

Turn on the TV or the radio, and one will inevitably encounter a preacher flashing what one pastor calls the “God trump card.” It signals that the holder is the recipient of a steady stream of revelations from God on matters big and small.

It's invoked so often that few question it, but two recent examples stand out.

In May, the Rev. O'Neal Dozier, pastor of Worldwide Christian Center in Pompano Beach, Fla., told an audience that Jesus had appeared to him in a dream and told him that the next governor of that state would be a Republican.

In March, spiritual guru Neale Donald Walsch published “Home With God” and announced that it would be the final chapter in his best-selling “Conversations With God” trilogy, in which he claims to talk to the Almighty.

“The voice of God often corresponds with something they very much want to hear,” Tucker says. “Biblically, God speaks, but God breaks through in a monumental way that's far beyond giving comfort or advice to any person's plan or agenda.”

Claims of personal encounters with God are nothing new. Christian, Jewish and Muslim traditions are filled with inspiring stories about God communicating with people. People of faith often talk about hearing God's voice in a dramatic situation or being led by an inner voice or a divine sign.

Click the link above to read the entire absorbing article. There's much to be said here about it, but I will confine myself to a few ruminations here ..
I believe in a God who speaks and wants to be heard. I am certainly NOT posting this to squelch trust and faith in a Father whose voice wants to be heard. However, I think there is MUCH to be said about our Christian culture (especially the Evangelical/Pentecostal ones) when it comes to thinking about - as has been well described - a glib, vociferous God always penetrating the sonic landscape of our overstimulated, plugged in lives with a divine voice pouring into our consciousness every moment of the day.

Cults and false religions surely have a field day with this, citing routine earthshaking encounters with God that they claim end up in their anointing by Him to become His exclusive mouthpiece by being equipped with a special divine empowerment that enables them to hear God exclusively. False prophets and teachers from time immemorial routinely claim to hear from God regularly to authorize their own peculiar polity or practice, from Baalam to the Watchtower's Governing Body to Gwen Shamblin.

I came from a Roman Catholic religious culture in which silence and contemplation of the mystery of God's presence was a thing worthy of aspiration but was so couched in Roman tradition that it was seen as the province only of mystics and those in religious orders. I have never lost that contemplative side which my early upbringing gave me, but have joyously received a revelation of a God who does speak to His children when I became a believer. But along the way, I've seen God's voice cited so often and so frequently in Christian circles that it is very difficult to not become confused, let alone cynical, about all of those claiming to hear Him speak to him in all things. Look at the dueling tongues of opposing "messages from the Spirit" in which "thus saith the Lord" is cited by warring factions over some matter in our churches.

Over the 26 years since that happened, I have come to see how we can barely abide a concept of a God who sometimes IS silent and who sometimes doesn't ALWAYS speak when we long and demand that He should. It's sad to see how Pentecostals fidget when we think we're not "hearing" from God regularly and think we are at some horrible deficit if we don't. Back in the 1990's, when Charisma Magazine had a TV show, I remember their interviewers always asking as a central point of their featured interview of some Pentecostal or Charismatic luminary one big question: "What do you hear God saying to the church?" .. as if to suggest there was a divine message bearing His will and prerogative each week for us to follow from the person involved.

Silence is not golden for Pentecostals. It is a source of irritation, fear and panic. That is what gets me about my beloved tongue talking brethren, of whom I am a part. Preachers and music ministers and prayer warriors have to fill every living moment in Christian meetings with our ubiquitous and cliched utterances.

I think personally that this is more an expression of insecurity by these folks more than the exhortations to attention we like to think it is, because they've GOT to hear if we are "with them." It's a DEAD service if worship doesn't have sacrifices of praise and choirs/orchestras who didn't lift the roof off the church building. We seem to always end up filling that silence with our own noise, spake into those awkward moments of fearful concern that we don't HEAR Him and are somehow losing out with Him if His Voice is not "heard" as a direct quote we then "speak into" our lives.
And then we cover it with the full gospel language that sanctifies what we say, in our belief it was God who indeed speak, but end up saying "God told me."

I am reminded of Michael Card's elegantly blunt song "The Final Word" here:


You and me we use so very many clumsy words
The noise of what we often say is not worth being heard
When the Father's wisdom wanted to communicate His Love
He spoke it in one final perfect Word ...

Surely I believe God speaks today. I have no problem with anyone else citing what you've heard of God at all. IF you've heard from God, you must bear witness to it. I've done this myself in the pulpit or in the prayer line. When I pray with people at the altar call that may be given in a church as a visiting minister or an elder in my home church, God will sometimes give me a word of exhortation, wisdom or knowledge to the person I am ministering to that I trust ministers grace, comfort, admonition and encouragement to them. But anything spake in the name of God will never contradict the written Word of God, and isn't to be some new source of divine revelation that supersedes the Bible. That's one of the greatest digs of cessationists against those who hold that there's a God in Heaven who speaks to His people yet today. Christians who understand the balance don't make that mistake - it's the immature, spiritually warped and the ignorant who do.

New Testament examples abound where the early church recognized and welcomed such intimate and immediate communion with God as being exhortational, edifying and encouraging in nature and not the source of doctrine. So I will prophecy as God grants .. not this kid in Himself

And I think that there's a lot to be said about the God who is THERE, the Lamb upon the Throne, who sometimes is just THERE to be worshipped and praised and adored .. despite His silence. The trials I am facing right now and in my past life - and I expect in the future - will be teaching that anew. I'd hope Christians out there would know the difference between such a Lord and the tragically unnecessary FEAR that drives us to put words in His mouth He never spake.

Posted by Reverend Rafael at 12:54 AM Links to this post