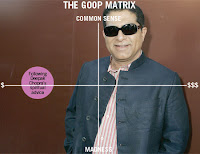 When Christian truth claims get caught in the crossfire of the culture rejecting them, their opponents (who would hate to be called such) resort to their usual spin doctoring to depict Christianity and its origins as something too far fetched and intolerant for any reasonably intelligent person to consider. It's the standard modus operandi for generations of skeptics from Ingersoll to Bill Maher who typically focus their antagonism towards Christianity along irreverent, probing philosophical lines. The self-centered spirit of secular humanism, which is at the heart of most modern rebellion today, freely imbibes from this well.

In so doing, their ridicule is now acceptable entertainment in our culture today, as gratifying as the religious humor cranked out by the likes of a Tyler Perry or Mel Brooks for the same audience, but with an appeal to the definitely atheistic eye. Such humor lights up the metaphysical boredom of the masses who, in laughing at the predicaments of the targets of their scorn or parody, provides a pop rationale for living any way they choose simply because they saw X or Y do the same. Such is life in our apostate world, a world in which a generation that neither knows nor fears the true God reaches for cultural predominance.

So when the scions of the syncretic New Age philosophy join in the frey, it's always telling to see how their supposedly enlightened spirituality targets Christian truth claims with a vicious malignity no better then the arena-baiting of today's pundits. Such is the example of Hindu ayervedic teacher Deepak Chopra.

A former adherent to the Transcendental Meditation guru Mahareshi Mahesh Yogi (the same one who found fans in the Beatles in the 1960's and who single handedly opened the floodgates for Eastern mysticism in the West that would morph into the New Age movement of the 1970's and beyond), Chopra finally severed his ties with TM and set out on his own path by writing, lecturing and speaking about his version of Ayurvedic wisdom, which is basically a form of Hindu occultism. Chopra's teaching is, like Mahesh Yogi's, a retread of Hinduism made more palatable for Western ears hearing buzzwords like "empowerment workshop", "awakening" and "yoga" and not knowing, or even caring, that they relate to a world religion based on the worship of other gods, including those of the self.

It was when his teaching finally found an audience in New Age-enthralled media goddess Oprah Winfrey in the early 1990's, the champion of all things ticklish to the ear, and who introduced him to the world at large via her TV show that his fortunes soared. Winfrey's highlighting of Chopra on that bully pulpit of daytime television, along with others like Gary Zukav, Marianne Williamson, Shirley MacLaine and Eckhart Tolle, guarantees millions of new disciples for their New Age ideals which in turn further solidifies its fundamentally antichristian worldview and philosophy, hidden behind a supposedly sublime "spirituality."

So in taking cues from the shifting cultural winds they've inspired, and being the pragmatic and sensitive spiritual teacher he is, Chopra's willingness to assail Christianity itself as he lambasts those who embrace it in the political process here in America is to be expected. When he appears on newscasts to recast Jesus as a sage who gained all of his wisdom from the paganism of the East of his day, his colors become quite clear. The sacred fire of "tolerance", of which Chopra and his tribe claim to be guardians, is scrupulously with held by them from those who would be disciples of Christ and who would live their lives practicing their faith. Hugh Hewitt's commentary on how Chopra's targeting of Christianity well argues that his own speech is a hate crime no less onerous or threatening. Click here to read it.

As usual, the purveyors of cultural "transformation" have places for every thing under the sun in their pantheons of the new idolatry of today, except, of course, the notion that Jesus alone is the Way, the Truth and the Life. Such "hate speech" doesn't fit on their altars.

That's fine with me. I'll preach it and live it out anyway. If that principle alone brings upon me their anathema of being a producer of "hate crime", I'm guilty as charged.

Incidentally, an excellent book on the blasphemous errors of the New Age written by Christian author and activist Vishal Mangalwadi is now available for free download here. Enrich your reading time with his outstanding book "When The New Age Gets Old," available in .PDF file format. And don't forget to visit Vishal's wonderful blog and website for his probing, thoughtful essays and writings on how Eastern thought seeks to eclipse the light of Christ. I had the opportunity to sit under Vishal's eye-opening teaching on the Eastern mindset at a Cornerstone Festival in 1986 and get to meet him as well.
Posted by Reverend Rafael at 6:15 AM No comments: