A Hard Reign Is Falling; A Crash Course On Christian Dominionism 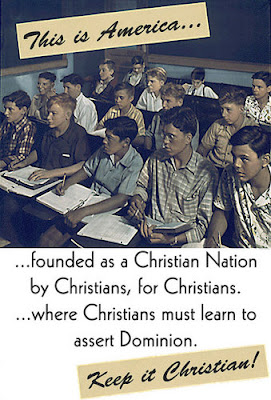 One of the regrettable things about time and energy is that everyone only has so much of it to expend on whatever passion or interest they have. You can only do so much and if you aren't careful, you can find yourself consumed.

Such is the unfortunate state this blog has been in. I love to think and I love to write and as we continue to see the world wobble down to ruin with absolutely no outrage, no outcry, no apparent concern, there's just so much to write of, to anguish over, to applaud, to question. The Facebook page has where much of my energy has been since opening it up a few months ago and you'd need to check it out to see what we have been digging up.

The writings I've done on the five fold ministry and spiritual abuse have yet to have the accompanying video I did on it almost 10 years ago finally get posted. So much life and struggle have consumed my life in other venues.  But the controversial five fold model of Christian church ministry which I've been grappling with almost since I was called to the ministry in 1983 has truly been, in the past, a significant investment in discernment ministry. My articles speak for themselves and I have never regretted it. They have helped, we believe, many people recognize a wicked extremism within it that has been squatting over the Body of Christ with a parasitical death grip of cultism, religious abuse and heresy.

However, one thing I seriously have regretted during all of that time is my failure to make the time to raise the discussion up to a level that it needs to be in. The whole five fold movement itself is only the tip of a far greater iceberg that I've barely touched on in all that time. It is an unholy and vastly more defiling idolatry that it has been embracing for decades that is far more insidious and subtle than is believable.

These  asherahs of five fold compromise have, if it can be believed, become far more monstrously erect and towering strongholds than ever before. They have effectively corrupted Christian faith into an unholy engine of religious oppression as cultic and as dangerous as the Watchtower Society or Remnant Fellowship. Hearing the tragic testimonies of those who've seen wolves in sheep's clothing hailed as mighty men and women of God by too many around them has been sobering.

These idols have been the real "Nephilim", the real giants of blasphemy, that certain self-described "watchmen" hiss about when referring to the dark conspiracies of the end times .. but who so totally fail to recognize. They have banded together into global associations, geopolitical action committees and mass movements of "reformation" with a sophisticated agenda plainly designed to ensnare many with a defilement as ruinous as sexual perversity, the love of money and sin for a season.

This idolatry is the rise of Christian Dominionism and the many hydra heads of its influence found in much of the Evangelical church today. I lament that I've had no time to bring that out more in my research, writing and teaching on the five fold ministry's abuses. But it can no longer be ignored. Hence my urgent blog tonight having to raise the issue.

And for a crash course on what it is, what forms it has taken and how it has related to the five fold ministry, please check out this article . The author has posted in the past on this extensively and while I don't agree with every conclusion he makes about Dominionism, I believe him to be spot on in tracing how it has evolved and become the force it is today. Much of the five fold ministry is in the pocket and control of the self-styled "New Apostolic Reformation" (NAR), directly serving as beasts of burdens in energizing the longstanding ambition by the movers and shakers of five fold leaders to change culture by theocratic and economic means - not by the Gospel of Christ.

As we have said, it's not just the departure from balanced Scriptural truth and example that the NAR but it's the degeneration of Christian fellowship into cultic fiefdom that one too many churches around the world have fallen into. The church in the link here is hardly the only one that stands in this defilement. The religious abuse of the five fold ministry we've highlighted have echoed these abominations within their own domains, all the while declaring "words" of "power" that will bring manifestation of their own authority over kings, presidents, mayors and governors.  This is exactly what this article's beginning quote by the late C. Peter Wagner is asserting. He was instrumental in helping the NAR's apostasy become an exponentially growing exercise of power mongering with a platform meant to be shared by any recognizable "five fold" minister, but especially those "apostles" and "prophets" he legitimized as authentic. Human nature being what it is, however, as you can read in the link above, people drunk on religious authority jealously guard their spiritual sovereignty and the NAR's character bears this out. God help us. God. Help. US.

Lord Jesus, help me to do what I can to say what needs to be said here in this .. I know what I've seen and just been unable to lift that trumpet up due to the others you've had me bear. Please, dear God, help the Body of Christ flee fornication!
Posted by Reverend Rafael at 1:49 AM No comments: 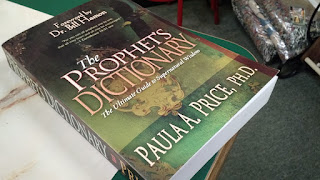 In a Christian bookstore, I discovered that you can market dictionaries of presumptive "prophets" and can have them identified as the "Ultimate Guide To Supernatural Wisdom."

I guess 2 Timothy 3:16 doesn't mean much in these apostate days to those whom it should matter.

All scripture is given by inspiration of God, and is profitable for doctrine, for reproof, for correction, for instruction in righteousness: that the man of God may be perfect, throughly furnished unto all good works.

I think I will just leave this right here ..
Posted by Reverend Rafael at 3:19 AM No comments: