What The Bible Says About "Seducing Spirits" 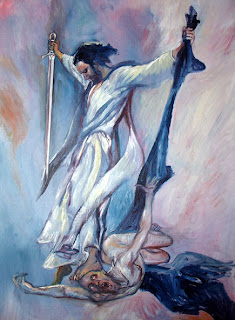 Someone asked an excellent question in a thread on a bulletin board I used to frequent about "studies" on the subject of "seducing spirits." Books were recommended, but I was thinking, well, why don't we as Christians just open Scripture up and discuss this ourselves? So here was my offering ..

It is my hope and my prayer that we can engage in reasoned study about this topic from SCRIPTURE. What I'd like to do is to offer up what Scriptures seem to directly allude to it, offer my own commentary, and interact with you on this. We can then agree or disagree on what Biblical principles or observations the Scriptures share with us. If we are Christians for whom the Word of God is the final authority, such a study I hope will help the Body of Christ as found among us who are largely within the fellowship of the Church of God.

But the Comforter, which is the Holy Ghost, whom the Father will send in my name, he shall teach you all things, and bring all things to your remembrance, whatsoever I have said unto you .. John 14:26

Father, in the name of our Lord Jesus, as we study Your word and this subject of critical importance which Your Spirit has called us to take heed to, as you did with the twelve on the Mount of Olives before you died for us, and as your servant Paul warned the Ephesian elders to also watch for, let us come together here and break this bread of life and hear what you would say unto the church today. Let us receive your word into our hearts and may it find a plain of good ground to grow in, that we may be edified, challenged and changed by your truth. Help us to be like your people in Berea were who searched the Scriptures and who saw if these things are so .. and help us remain in a charitable spirit, even if we disagree .. in your Son's Holy Name, we ask, Amen!

As a Christian minister who labors in areas of discernment, doctrine and discipleship, this Scripture has always been of great interest to me. Spiritual deception is, according to Scripture, one of the top signs of the advent of the last days, and Paul's warning to the young preacher Timothy echoes down to us yet today. The term "seducing spirits" occurs only one time in the KJV of the Bible, but can be found in a couple other Biblical translations:

1 Timothy 4:1 - Now the Spirit speaketh expressly, that in the latter times some shall depart from the faith, giving heed to seducing spirits, and doctrines of devils;(KJV)

And the Spirit expressly speaketh, that in latter times shall certain fall away from the faith, giving heed to seducing spirits and teachings of demons (Young's Literal)

But the Spirit saith expressly, that in later times some shall fall away from the faith, giving heed to seducing spirits and doctrines of demons, (American Standard Version)

The NIV version brings an evocative shade of meaning to the translation of the verse about the nature of these "spirits":

The Spirit clearly says that in later times some will abandon the faith and follow deceiving spirits and things taught by demons .

And Eugene Peterson's ever fascinating paraphrase in "The Message" renders it as follows ..

The Spirit makes it clear that as time goes on, some are going to give up on the faith and chase after demonic illusions put forth by professional liars.

5) These "departed" ones take heed to TWO sources of error

7) But both sources of error originate from a spiritual perspective

Heavy stuff. But I didn't create it.

My thoughts on these observations?

This is a warning of the Spirit to the CHURCH ABOUT the horrible conditions of the CHURCH in what He "expressly" warns are in a period of time called "the latter times." From these observations, I think, we gain a LOT of light about how the Body of Christ is threatened by spiritual deceptions that His Spirit plainly and unblinkingly says will cause people to "depart from the faith." And the most sobering thought of all is that this will occur WITHIN the Church in the last days .. that there will be Christian brothers and sisters in our fellowships who will embrace deceptive teachings introduced through entirely spiritual means.

I think the reference to "seducing spirits" can refer to both the carnal, natural mindset of the religious HUMAN spirit as well as the demonic, and the reference to "doctrines of demons" one that refers to those foisted upon the human spirit through direct demonic influence. The Bible has MUCH to say about the profoundly subtle and deceptive nature of persuasive human reasoning and philosophy that gains a following, as well as those things plainly introduced to us by demonic influence.

Men and women can be "seducing" in both social and doctrinal dimensions, and as the old saying says "sin always loves company." I have seen this again and again and again in cultism as well as in abusive churches, where people with false doctrine gain a hearing and then wield an unquestioned authority over others by their seemingly blameless, moral life in which they seem more Christian than Christians. Their outward "holiness" is what provides the seductive, deceptive element to their spirit they present themselves in. They use enough truth to honeycoat their lie, and they use every sphere of human interaction they can to spread their insidiously deception - working from the printed press, the altar "ministry" to the "spiritual father" circles and back again to gain disciples "after themselves," as Paul warned in Acts 20.

With the steady advance of church bodies caving to cultural pressure and not to mention internal apostacy, deception that can only be viewed as a literal seduction that leverages fallen human nature and false teaching inspired by its carnal, exploitative factionalism is the mark of the age. Voices that once called for engaging the culture and challenging it long ago are silent. And as I've said time and time again, Jesus said it would be this way .. any casual reading of Matthew 24 shows this.

When the evil becomes good, and it is lauded as the goal of life .. the game is about over.

Posted by Reverend Rafael at 1:02 AM

your observation blessed me! daniel from germany..

Here lately I have been studying on seducing spirits and I know that it isnt for any reason yet I ask myself because when I was younger and went into the world when I came out the streets things changed.You have so man forms of cultism and lying prophets it's amazing I sit and read the word of God yet I pray that I receive the truth but from what is going on in the church I ask God "Lord what is the truth" I have seen so many peopl etake the word and get revelation from it yet they seem to been more focused on the revelation than the word.You have some that come withthese catchy titles that are educing themselves.I say to my self Lord i know that you give us all understanding yet that is for us and not to go out and and go before your people saying look at what he showed me and that it's not for them but for everyone esle but.I see constaly people begging for money, prophecy of material things yet these things are for the unbeliever yet all you see is people running to see a prophet like they can't hear from God them selves.