Yeah, this old post never saw the light of day but there's a point here.

2016 Indiana General Assembly Indiana House leaders commit to civility
Dan Carden Jan 9, 2016
>>"We will do everything in our power to be certain that no matter how difficult the discussions might get on any issue, that we're respectful of each other, that we talk about ideas and not personalities and that we work together to do what we believe is best for the state of Indiana," Bosma said.<<
<SNIP>

Then the 2016 Presidential campaign and the rise of the Trumpocalypse in American politics arose. I was too busy to complete this post and I wondered how long that lasted in Indianapolis that year. I guess I could look it up and see how far the discussions on gay rights and incarceration went.

What we are immediately aware of is that on the national level, the arise of the  Trumpian political movement contributed in 2016 to the through the roof escalation of partisanship in America perhaps for all time. Democrats arose to combat the equally hardened Republican positions in the body politic and a culture war was renewed.

But it wasn't as usual. There's been long something entirely different the past few years. The hardening has moved from stone to tool steel. Civility is now viewed as a soft skill leading to targetting by an army of foul mouthed and feral contrarians who would rather, as the old cigarette commercial puts it, fight than switch.  4 years of scorched earth confrontation became the norm of American politics, not cooperation. America has turned a corner within itself that it's likely we will not be turning back from. Civility and decency are just not in anymore.

And this year, the Indiana political scene has returned to this new norm most clearly seen in the second impeachment proceedings as acted upon by members of the Indiana congressional delegation:  there Republican Jim Banks, one of the newest and shiniest minted figures of the Republican machine in the Hoosier state just had to post a video where he stated flatly "Right now, I’m headed to the House floor to vote against impeachment. The Democrat party is dividing America when we should be doing everything we can to unite the country." So much for the civility.

Oh well, that's to be expected, at a time in which the prophet Daniel warned that relationships between people and nations were going to be falling apart. Jesus said that the love of many would cool and dim to reinforce this sobering view of life in our fallen world.

So this old picture saved for this post back in 2016 really says it all. Ignore the Obama seal and things pretty much are the same. 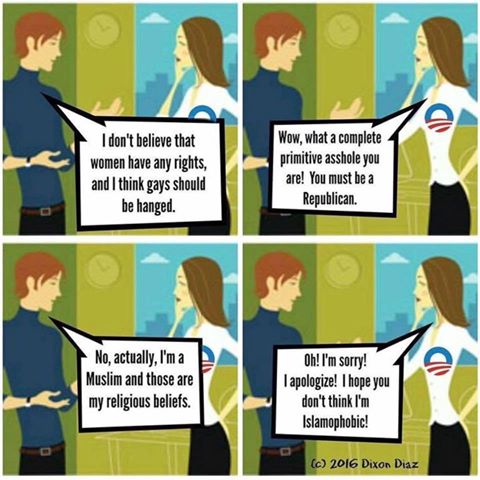 Posted by Reverend Rafael at 10:59 AM No comments:

Quite The Contrary: A Kindler Gentler Pope Does Not A One True Religion Make 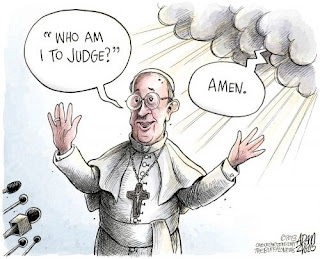 2013 saw the ascendancy of Argentina's Archbishop Jorge Mario Bergoglio to the throne of the Papacy in the Vatican, as his predecessor Pope Benedict XVI retired. Bergoglio chose his pontifical title as that of Francis to intentionally identify himself with St. Francis of Assisi, the founder of the ancient Franciscan order noted for its focus on simplicity of lifestyle and service to the poor. And during the first several weeks after assuming the post, his personal charisma, lifestyle choices and pronouncements made it clear that Pope Francis would not be doing high church as usual.

He forsook residency in the official papal palace in Rome, opting for a more modest suite in the Vatican guesthouse. Francis eschewed the usage of the the papacy's opulent vestments, mink stoles and bejeweled accoutrements for simple and plain ones. In his pastoral declarations, he has called for the Roman Catholic ministry to renew its focus upon compassionate service all around it, to even embrace vows of poverty to do so  and to forsake the aloof and often distant relations that are too widely the norm in churches globally. And his warmth and beatific presence radiates a human authenticity impossible to ignore and appreciate.

When you hear that Francis sneaks out of the Vatican anonymously to visit the sick, in the same way he did in Buenos Aires,  delighting the common and the ordinary of his flock with pastoral ministry, how can you fault it?  All of these are clear signs that that the pope is practicing what he preaches, that he prefers a church "which is bruised, hurting and dirty because it has been out on the streets, rather than a Church which is unhealthy from being confined and from clinging to its own security" and that this is the new direction for Catholicism he's chosen. In short, Francis' personal example and passionate inclusiveness seems like a beacon of renewal that thrills a lot of Protestants who persist in believing that the prayer of Jesus is John 17 must inclued a renewed Protestant - Roman Catholic reapproachment.

Seeing the head of the Catholic Church serve it notice that it is "off mission"  and out of touch with too many around it is refreshing .. and yet ultimately maddening to see.

For at the same time Pope Francis seeks to reenergize his church with a new focus on grass roots values of sacrifice, compassion and tolerance, his revisioning of Catholic faith has shaken the church in far more profound ways. Already in deep crisis over ongoing pedophile scandals, the decelerating vitality and relevance of the church's influence globally, and it's own ancient factionalism at war with itself , his direction of the church has provoked longstanding resistence and even rebellion among those who would affirm his role as the Vicar of Christ leading the Only True Church, the Church of Rome.  At a time when the church's soul has been rent between liberal and conservative factions, it has become clear that Pope Francis' approach includes affirmations aimed at incorporating far more substantial change than just a call for return to ministry to the downtrodden.
The Pope's endorsement of universalism, a belief that all people, even atheists, are bound for eternal life was one such shot across the Church's bow.  Such a startling assertion, at odds with virtually all Protestant communities, also completely contradicts the Roman Catholic view that only those in full communion with it have any hope of such a thing .. a blow to the claim of it's objective exclusivity that outside the Roman Church, no salvation is possible which has long been the bulwark of Catholicism.

Another of his saucily proclaimed assertions was Francis' recent approval for same sex unions has been well established with his famously eye opening refusal to judge homosexuality as the grave and mortal sin that his predecessors have.  This total break from two millenia of Roman tradition holding to homosexuality as a grave and mortal sin sent even further shockwaves through the church. It has caused no end of feral debate among gay Roman Catholics and those of their brethren who would assert they are in sin, a state of affairs not lost upon the LGBTQ movement as it seeks to establish itself as a normative institution.

Still another was the earthshaking willingness expressed by Francis in one of his "Apostolic Exhorations" a few years back to extend privileges in the Roman Mass to Roman Catholic divorcees who remarry and do not obtain formal release by church annulment from their past marriages. This has  caused a massive firestorm of debate among church leadership globally to the point that Francis has been officially approached by Roman bishops to clarify what he meant .. and he has refused to answer.

I could go on with more of this, but suffice it to say that this review of the example of Pope Francis shows us one thing very clearly.

For all of its historic posturing as the One True Holy Roman Catholic Church, as the One True Faith, the Roman Catholic church's very human dimension of its leadership has become a clearly established reality. Behind the pomp and prestige of its position, we are seeing once again how it is one filled with the contradiction of pragmatic idealism colliding with factionalism and cultural accommodation, set in the high stakes game of the control of the Church and its future in a world that is increasingly hostile and indifferent to this ancient institution.

Francis is a product of his times whose leadership has caused no end of controversy and division within his own church even as those outside it reckon him to be a really cool guy who's just like them, to the deep consternation of the Roman faithful. He's doing what he thinks he should to lead his church to the same kind of inclusive tolerance he has fostered .. and is finding himself under resistence by his own flock to the point that his name has now become a flashpoint among Catholics inspiring division and controversy, in a church where pride and faith in its being free from error and being unified is seen for what it is - the vain hope of the indoctrinated not understanding what kind of slaves to human tradition they have become.

In 2000, one of his predecessors, the late John Paul II agonized over the "sins of the church" in a public act of repentance over many of the Roman Catholic church's historical failures. Many lauded the Papacy for its "moral courage" but there was absolutely nothing said about it's greatest sin. He and no other Roman pontiff has dared to repent over the foundational sin of Romanism - that good works must be trusted in to save since faith is not enough, that the Roman Mass must replicate the sacrifice of Christ to give those good works something to be built upon and that all who would disagree with Roman tradition are under the curse of God.

If the Papacy is ever to be really trusted, and that's a proposition this ex-Catholic gave up over 40 years ago, its repentance from these dead works of religious tradition would be a great start. Giving up on its pronounced curses on those outside the Church who affirm faith alone in Christ would be swell too. I hope someone has a hot mike on when they find Francis in a Starbucks somewhere and ask them about these things. It would make for another interesting interview for a pope who likes to depart from his planned remarks.

Read more about the unbiblical nature of the Roman church at our collection of the late Keith Green's articles called the Catholic Chronicles here.

Posted by Reverend Rafael at 2:30 PM No comments: