It's Official: Same Sex Marriage Is Legally Sanctioned & The Apostasy Ramps Up A Notch or Two 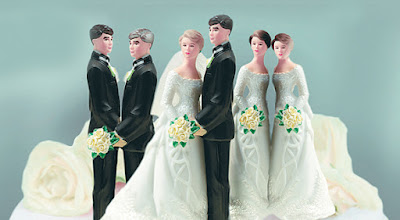 "If you are among the many Americans—of whatever sexual orientation—who favor expanding same-sex marriage, by all means celebrate today's decision. Celebrate the achievement of a desired goal," Chief Justice John Roberts wrote. "Celebrate the opportunity for a new expression of commitment to a partner. Celebrate the availability of new benefits. But do not celebrate the Constitution. It had nothing to do with it."

Same sex marriages just became the law during today's Supreme Court judicial activism and a supposed "civil right" that had previously been all but assured cultural adoption is now the new "normal" in America.

Do the math: which of the three couples above will perpetuate society, will give birth to children?  This no longer matters, says our culture when the demand for loving relationship at the cost of society itself at large is far more important.

June 26, 2015 will mark a significant day in American history, when the slouch to Gomorrah became a skip.

The gayification, if that is a word that can be used, of culture - that is to say, the final efforts of the LGBT agenda to paint their lifestyle choice as a part of normative equality, has now pretty much claimed it's room at the table of the American way of life. No one in any institution anywhere can raise any objection and not be demonized in the ultimate intolerance. But that's the way it's been and has been a reality long coming. In light of the many years of legal tyranny and skullduggery to overturn state's rights to define what marriage is as well as the ongoing national accommodation of gay relationships and marital unions, this was a given self-fulfilling prophecy that was foretold years before the first

And the Christian church supposedly is the last place where any objection to gay marriage can possibly yet be heard, except for the ultimately futile attempts by ultra conservative lawmakers to pass a constitutional amendment banning it.

But the tide of cultural apostasy is too advanced to stem now and as so goes the culture, in these last days of deepening darkness, so will go the church. The pressure on the church to sanctify gay marriage and lifestyle as a part of "progressive" Christian faith has just increased a hundred fold. When homosexual pastors "come out" and decide to militantly declare that "God has always honored our unions," then we can safely say that those who disagree will find themselves under the baleful glare of those who would demand they get with the gayme plan and be "Inclusive" and to stop being unwilling to have "deep discussion" about it, as local gay pastor Randy Duncan would assert.

The final moments of waning light are now fast fading .. and I'll let Larry Norman, despite his own checkered past, have the final say on where we are .. 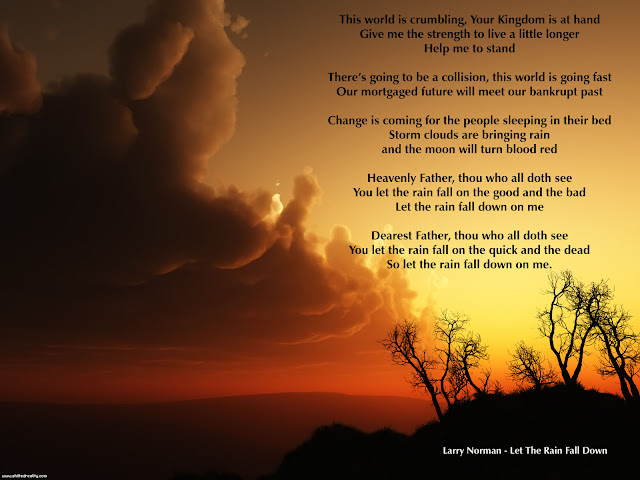 Posted by Reverend Rafael at 11:44 AM No comments: