What Do You Mean By Christian "Apologetics?" 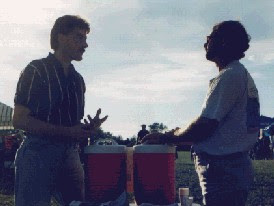 The term "apologetics" is drawn from a Biblical Greek word "apologia", and doesn't mean one's "apology" for being a Christian! The world literally means to give a reasoned defense, a verbal speech in defense of oneself. Paul the apostle had to resort frequently to this when facing down the rebellious Corinthian Christians who challenged his authority (1 Cor. 9:3): "Mine answer (or apologia) to them that do examine me is this .." An apologetic is a verbal defense, an explanation for one's beliefs and practices. Therefore, Christian "apologetics" is the process of defending the claims and teachings of Christianity.

As Edward John Carnell once put it "Apologetics is that branch of Christian theology which answers the question, Is Christianity rationally defensible?" (emphasis author). Christian apologetics goes beyond simple proclamation of Biblical truths, whether in traditional preaching or systematic theology: it not only seeks to proclaim these truths but provide the answers to whoever might raise critical objections to the Christian faith. Carnell also goes on to explain the two fold purpose of apologetics:

First, to bring glory to God. Just as we would defend the words of our earthly father, so we defend the words of our Father in heaven. Secondly, to remove from critics any excuse for not repenting before God. Men who refuse Christ because of presumed 'logical errors' in Christianity are men with a self-righteousness in the area of knowledge. They are resting on props which must be pulled away.

Christian apologetics, then, is a balanced and reasoned defense of the truth claims of orthodox and historically Biblical Christian faith and practices, with the aim of glorifying God and bringing those objecting to or distorting the faith to see not only their error but their need of a Savior, the Lord Jesus Christ.
Posted by Reverend Rafael at 9:22 PM No comments: