Children And Cults: Some Things Should Never Mix But It Goes On Anyway 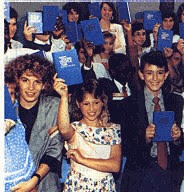 Childhood is a time which we are shaped in what we are to become as not only a human being but as a free individual. It's a well known fact that one's essential approach to life is shaped indelibly by the seminal influences of their childhood. You are what you went through as a little boy or a little girl in a big, wide world you took as it came to you, learning things by raw experience mediated by parents, other kids and the culture you lived in.

The writer Robert Fulghum was right when he stated years ago that by the time we've passed through our kindergarten years that the most formative experiences we've encountered are those that took place as young children .. very young ones. Only those in denial or completely out of touch with their childhood due to trauma, abuse or other reasons could possibly disagree. I can't precisely remember the verbiage, but I remember reading as a child a set of proverbs, formed in couplet form that explained it pretty clearly, stating things like:

And of course, the foundation for all of this will be the kind of cultural environment you've been raised in. No matter how well meaning the parental or mentoring relationship of a child, the culture of the social setting they live in largely defines reality for them, assigning biases, fears, observations and values that color all of the positive regard they may receive. Obviously, the more darker side of this culture stains their own consciences and value systems in the hues of the social milieux that they are meant to assume. It's all done instantly, effortlessly, definitively. Children are socialized into becoming who they are by whom they are touched by - be it the most solicitous of parents or slimiest of foster parents.

However, in the toxic world of cultism, where sectarian fellowships and authoritarian worldviews effectively seal their members away from the larger world they live in by invisible bonds of relational influence, the impact of abusive cultic influence on children is far more insidious than can be easily described and yet it is also Constitutionally protected. The slippery slope downward into religious abuse is a descent from the high grounds of freedom of religion that tragically haunts the lives of the members of cultic groups and abusive religions. It must be remembered that religious abuse is an equal opportunity human blight - it occurs in all religions, all faiths. The evangelical Christian church is sadly just as subject to harboring this as the local ashram and Hindu temple or the Jewish synagogue. That is because human beings are pretty much the same and all of us suffer under the same twisted side of human nature that lends itself to dysfunctional human relationships. And all of this is governed by the Western ideal of individualism which asserts the right of an individual to follow their own dictates and be governed by their own conscience, as long as none of the "laws of the land" aren't broken.

So the sexual, physical, social and emotional exploitation of children will automatically follow religous abuses, with predatory and/or manipulative adults working within their cultural frameworks to gain access to and dominate, control and abuse children. Whatever cultural mores the group follows may actually empower and embolden the abuser to pursue one kind of abuse while enabling them to opportunistically engage in another. These twisted people (male and female) may be the hidden minority in any group, but in cults and abusive mainline faiths, the same sick group dynamics that enable and conceal these horrid things are firmly entrenched in their culture where the abuser moves freely, taking cues from the authority claims adults can make within that culture to prey upon children and teens.

For example, a mentoring male adult figure will sexually abuse a pliable teenage girl in his given religious setting on the basis of his given right to assert a divine authority over her to monitor and correct any errant behavior. He might approach her as the Religious Authority or the Counselor or the Good Family Friend or any other cloak he can assume, get her someplace quiet and then force her to yield in any number of ways. He then is able to silence her effectively because he shames and guilts her into silence with dire spiritual censure and citing the consequences of truth coming out (no one will believer her, it was all her fault, her parents will disown her, she'll prove she's a "bad girl", she tempted him, she'll burn in hell, etc.).

Or he can use the infinitely more damaging approach by trying to maintain the image that this was part of a divine plan, that someday she'll "understand," that this was something God wanted her to experience as part of a special "time" in her life, playing upon her immature emotional and sexual drives, fears, longings and lusts to firmly embed her in a deceptive snare of the soul. With her own personal sanctity now utterly violated and redefined against the broader moral standards of the group twisted to fit the abuser's fable he creates to silence her, she's now a toy in the hand of the abuser who will likely continue to use the unique group mores about this in a viciously exploitative way to manipulate her .. and others.

And sexual abuse is just the most visible form of abuse .. there is of course physical punishment as well. The adult figure could also easily engage in emotional and psychological badgering as well as battering which leave no physical scars but which profoundly traumatize at many different levels the self-image, self-esteem and worldview of the child in the cult, giving them a skewed view of themselves, reality, other people and their place in the world - which is, of course, to serve and exalt the "pure doctrine" of their group at the expense of their own minds, hearts and consciences.

It is THIS influence that probably is the far more dangerous and insidiously abusive influence of cults on children and is what leaves millions of them as broken people who plod along under the malign influence of their group's exploitative attentions all of their lives. The cost this leaves them - from depression to suicide to broken marriages to the perpetuation of the cycles of abuse - is a social blight no religious leader of ANY faith could possibly view as indicative of their highest spiritual ideals.
And yet, it happens.

Jehovah's Witness children still get sexually abused and their cries smothered to protect the Watchtower (click here to watch by Real Video my talk I did on this a few years ago). Remnant Fellowship teens mature with the shadow of belief that eating outside "God's boundaries" will send them to hell which is setting a lot of them up for serious psychological problems later. Mormon youngsters clam up and self-destruct internally as they struggle with their hormones and the tension set up by their religion's perfectionism bidding them to be "worthy Mormons" who will some day become gods.

It's all done as part of what the adults think is ultimate spiritual truth that governs how we are to live. That's probably the worst spiritual dead end of all .. to see a nice bright morality imparted to a generation of children who find it tied directly into a performance based religion that relegates their individuality into menial personal busywork to keep the image of the Revelation or the Doctrine or the Philosophy squeaky clean, no matter what it costs them.

Don't forget that these are the dominant form of ruthlessly controlling group dynamics in a cult that scars and injures more people than you can ever possibly imagine.

They are lost behind the ad print, the snappy videos, the happy faces of youngsters .. it is the most horrific reality imaginable, to endure terrors inflicted upon the powerless by those they trust most of all.

The recent Texan FLDS case sheds light upon this potent dilemma. This was the case earlier this year in which hundreds of children, raised in what Texas law enforcement and human services officials believed were coercive social conditions that involved sexual and physical abuse of many of them, were forcibly removed from the "Yearning For Zion" ranch to investigate their well being. It once again exposed the grotesquely shadowed and secretive world in certain corners of Mormon fundamentalism.

Having taken the position that patriarchal dominance of several women in polygamous relationships was a religious norm for their lives extended this warped principle (which they have a Constitutional right to believe) to such a degree that underage girls who were far from adults were taken routinely as brides for men with several other wives who were easily the age of their grandparents. An interstate network of these groups exists all across the West to facilitate this literally human trafficking. Reports of underage boys being expelled or driven off from Mormon polygamous communities as well as others to keep the available pool of nubile virgins ripe for the picking also have been common.

And all of this is going on, right now, in America while law enforcement and human services officials wonder how to approach the nightmare to address it since these coerced and criminal couplings of 15 year old girls to men three times their age are inextricably wedded (pardon the pun) to their Constitutional right to practice their religion. The ACLU stands up and cries "foul" and these girls' mothers, who were those 15 year old girls in the past, give press interviews and delicately protest the exposure of their religiously exploitative lives in chillingly Stepford Wife fashion.

This horror is simply just one of the most obvious icebergs of cultic impact in our world, with their far more dangerous bulk hidden in plain sight beneath the seas of humanity, smashing them aside as they drift in the uncharted regions of human society. There are social institutions and settings that are beyond belief in which this kind of cultism routinely, mundanely, shamelessly trods all over the hearts and minds of its young. They going along for the ride - no matter what it costs them.

It's our world and you're welcome to it - whether you want it or not.

Read some more here about how children in cults suffer in silence while the church fiddles about and does little to nothing to reach their parents and help end the nightmares.

Posted by Reverend Rafael at 4:18 PM No comments: