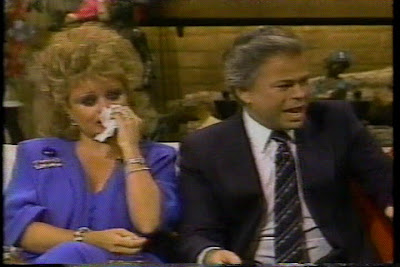 Jim Bakker, sadly, was a pioneer of not only one of the first big TV ministry empires, but of one of the most massive "fails" of all time that millions to this day still have to deal with.

The example of Bakker and the PTL Club's sad implosion exposed a sad pattern for the church that it should have learned from. It also showed that the church seems almost unwilling to learn, setting out to establish that the hero worship of "the anointed" has to be restored at all costs for us to show "Christian restoration" as opposed to true, equitable discipline and accountability.


In the midst of these extreme and obvious examples also proceed the more prosaic but no less tragic failures such as the lamentable fall of ministers all around. And then you have the Juanita Bynum and Thomas Weeks grotesque disconnect as well as the ongoing mutancy of Jimmy Swaggart's renegade work. As well as Pastor B. O. McSnort's extortion from the Big Ugly Church of God of his youth group's donation account money, as well as his youth group leader's wife .. not to mention Paula White and Benny Hinn's dalliance last July in a hotel in Rome when Hinn was not even yet technically divorced from his wife ..


With the ashes of Todd Bentley's sanctification of his adultery by "prophet" Rick Joyner still drifting in the wind, it's obvious that the church still hasn't learned these most crucial lessons of all, which it seems more clueless then not about ..

Our high esteem of Christian leaders should be tempered with the realization that men/women of God are still in the end, just men/women like you , people with feet of clay who stumble and fall JUST like you .. and who aren't above correction, admonition or removal

Had all the anonymous people involved in all of those invisible places where the sin and failure had to first have been seen in the lives of so many of our fallen leaders spoke up, life for many of these might be so different. How many people "spoke into the lives" (what a strange expression) of these "fallen generals" to actually deal with the core failings they manifested at some level in their private and public lifestyles?


Sin and the flesh being as carnally suave and deceptive as it is, I realize that such a perspective isn't always able to penetrate the poker faces of those who are confronted. Human nature has an almost limitless ability to rationalize and disguise itself behind open appearances of holiness and orthodoxy - and our trust in what we see is where we miss what our discernment from other sources overrides this. Perhaps it's not possible to head off all of these troubles. But I am certain that SOME of them very likely could have been.


I didn't "see the light" about who God was until 1980 and didn't come to Christ until 1981. I did so with absolutely no connection or attention to TV ministry at all. My encounter was one with the Spirit and the Word and Christian testimony I encountered while joining the Navy. As quickly as new life came to me by my faith in Christ so did offense, carnality, temptation and I almost didn't make it through. Only the grace of God brought me through it all.


I had heard of PTL through my mom, who was saved, and watched a bit of it with her around 1979 but it was completely incomprehensible to me. Really. The God gabbing and God giggling I saw was beyond my ability to grasp. I think one can say this and say that it was just my carnal and pagan side trying to grasp spiritual things. Perhaps that had something to do with it.


But frankly, there was so much of what I saw those one or two times that sounded nothing more than what today we'd call the Christianese that obscures Christian truth and revelation from anyone who might even be casually seeking what Christians put so much attention on. It seemed so much more like a variety TV show having fun and games with an audience waiting to get the punch line. Then I watched a couple of TV specials around that same time by ABC's 20/20 and CBS's 60 Minutes that pioneered what would become the standard liberal media bias and focus when it came to the then emerging "Religious Right."

Each show interviewed evangelical leaders and critics and framed their responses the way they wanted to by using seamless editing. Between shots of giant Jesus rallies and soundstages, they intrepidly followed ministry money, fund raising and bill paying, dug up improprieties, made their conclusions. And then they interviewed bright eyed followers and got sound bites from them which made them look like brainless sheep blindly following dynamic, fire breathing Furies who happened to be "televangelists" pioneering "pray TV." It became obvious to me that the TV programs were more aimed at showing what kind of Elmer Gantryesque shysters the TV producers wanted their viewers to perceive PTL et al as. Even then, while an unbeliever, I saw the attack dog approach and was turned off by the press' inexplicable hostility, driven by their own agenda dedicated to the defense of their gods.

I guess what's important is that the effect of both of these media convergences in my pre-Christian pagan mindset is that I just steered completely away from watching any Christian TV at all .. that, I think, probably saved me from a lot of subsequent confusion when 3 years later in 1983 after discharge from the Navy, I had little to do with Christian TV when I started going to church every time the doors were open.


Aside from viewing "The John Ankerberg Show", which I found to be the most stimulating 30 minutes of Christian TV I caught regularly from August 1983 onward, I just didn't care to watch Jimmy Swaggart's telecast, the "700 Club" or the PTL Network's shticks. My discipling focus never got hung up on the media - it stayed on my knees, before Scripture, alone with God and in community at church, meeting with believers and witnessing to whom ever.


I am certain there was a lot of blessing that came out of the Christian community that was attracted to the PTL empire and I think the motives and intentions of all were initially pure. But the need for money to finance silly dreams that had little connection to the urgent reality of the need to evangelize and disciple people in obedience to Christ's Great commission is what destroyed Jim Bakker and the PTL Club.


And I raise my own personal recollections of those times because, I remember one exchange on 20/20 back then with Bakker that I think said a lot about what I'm talking about in regards to accountability and correction. Bakker was confronted with the fact that back around 1979, he'd started a fund raiser on his show specifically to finance the construction and creation of a TV station somewhere outside the U.S., collected a huge chunk of cash, and then instead diverted it to PTL general operations. He was leaving viewers to believe that their giving was going to this project instead. 20/20 apparently found someone who had records to corroborate this rather unbelievable state of affairs, confronted Bakker with it on camera, and he flat out admitted to it, as well as stating explicitly that PTL had engaged in dereliction of their duties.


My point is that while dirt may have been dug up on PTL, PTL should never have created the dirt to begin with.


What I come away from in reading and research into the PTL fall, since having become a maturer Christian then I was in 1983, is that this pattern of evasion, covering and rationalizing that PTL freely engaged in is something far more dug into Christian culture then is believable. But it happened. God alone knows how many other such matters on so many other levels took place. Bakker's book "I Was Wrong" doesn't really begin to touch this, although his candor is helpful.


His marriage with Tammy Faye seemed to go askew around 1978-1979 .. and it was then, around 1980 that a Jessica Hahn crossed paths with him, thanks to the "ministry" of a John Wesley Fletcher. That fundamental issue should have rung peals of church bell alarms for EVERYONE at PTL at that time. But the circus went on, and the Bakkers continued to act like everything was AOK.


But again, my point is simply that Christian history seems to infer that when Christians are in the position to speak up and confront the failings of our own leaders and do not do so, the subsequent fall from grace will take so many others down with it then need to go with them. As I said, perhaps it's foolish to expect that we can stop everything and keep the Body of Christ from suffering the reproach it does .. even if the Bible SAYS so..

I just cannot shake the feeling that there's more that can be done then we do .. and do not because we want to be politically correct.
Posted by Reverend Rafael at 8:28 PM No comments: