You Can't Keep The Only Good Man In History Down! 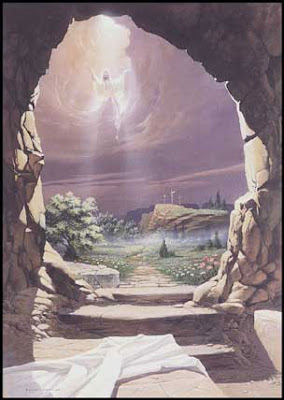 The Pharisees thought they'd solved their troublesome religious problem that threatened their authority. The Romans had washed their hands of their part in handling a civil disturbance in one of their conquered provinces. The Jewish mob of easily excitable pilgrims passing through the temple there in Jerusalem assumed another blasphemer had been dealt with. The disciples of Christ all assumed that their Master was gone and struggled with the dark nights of their souls and a shattered faith.

And world history as well as the skeptic, atheist and deconstructor over time tries to rationalize, mock or redefine away the plain facts of the matter, trying to "prove" that this was all a legend, a myth, a delusion.

The Lord Jesus Christ had greater plans. For Sunday was coming!

He AROSE from a grave that wasn't his, taking up again a life He laid down, paying a cost He didn't owe, and proving once and for all that He loved us first even we were and are still yet so unloving. The tears on every face can be dried .. the hurts and pains of humanity's misery can be healed .. and the doors to Heaven opened up once more!

Praised be to God, Jesus is ALIVE!

And because He lives, all who trust Him and Him alone for salvation can live also! It's there He has sealed our every victory, grappled and beaten every enemy, bestowed unspeakable spiritual giftings and authority to walk as He did, and dried every tear


Posted by Reverend Rafael at 6:04 AM No comments: