Humanistic Logic At It's Worst: Or "Honey, It's George Bush's Fault I Had To Have An Abortion" 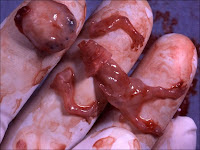 Don't get me wrong. Humanism is a philosophical postion that in essence enshrines the self-determination of the human being as its' foundational belief. Like it or not, there are affinities between classical humanism and Christian values that, if not too stretched, show distinct harmonies of intent and agreement. We'll discuss that at a later time.

Unfortunately the breed of "Christian humanism" that typified the Enlightenment's Protestant spirituality doesn't begin to hold a candle to the moral shambles of today's humanistic influence. Reapproachment of the two seems a lost cause when
most of the humanistic intent of the day, as surfacing in culture, sanctifies the "rights" of the human to assert their own position almost to the exclusion of other equally valid concerns related to ethical and moral questions raised by their "self determination." Exit Terry Schiavo, stage left. Exit Baby Doe, stage right. Enter the so called "Young Men Christian Association" field trip to an abortion clinic in New Hampshire. Enter the Bratz dolls that remind little girls that to be pretty, you must be a sexually precocious little flirt. I need go no further.

I stumbled across today what is quite possibly one of the most pathetic and warped signs of the times I've seen yet about how this self-centered philosophy, upon which secular humanism is based, has successfully persuaded a harried mother of two children to jettison all conscience and end the life of her unborn child. Oh but wait, it gets better.. It was all because of George Bush.

Unbelievable, but true. You can't make this stuff up.

Click here to read and weep.
Posted by Reverend Rafael at 7:56 PM