Another Sign Of The End Time Apostasy: Very Bad Theology On Church Signs 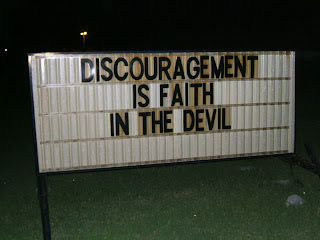 "Discouragement is faith in the devil!"


This kind of jolting and confrontational rhetoric, based upon a certain and all too familiar black and white worldview found in Evangelical circles as well as in the Word of Faith Movement, was seen posted on a church sign erected outside a large church as Joy and I returned from Chattanooga. We won't say where the church is to spare them from any further embarassment, but it's a well known one in the area here.


It's the kind of thing you'd expect to hear from a bellicose, fire tongued preachin' clone of Gregory Dickow, Joyce Meyers or Kenneth Copeland whose endless verbosity about faith includes harangues like this one seen on the sign. I've heard Faith teachers fill their homespun homilies with provocative statements like these meant to jar their starry eyed disciples on to newer depths of commitment to the concepts of "faith" they push ("You'll be hung by your tongue!" "Have faith in your faith!" etc.). I've seen this kind of stuff planted firmly in the "outreach" of Faith church's signs posted for all the world to see and be "inspired" by.


The core thought that this church thought important enough to shout out to the whole community around it seems to be that if someone is discouraged, as if that wasn't bad enough, they've committed a horrifying abomination. If someone is struggling in faith or is depressed by their situation, despairing of whatever issue faces them, the sign screams that they actually are abandoning God and exercising faith in the person, power and principles of Old Scratch himself, the devil. The implications of this are absolutely beyond belief, an unconscionably direct assault on the hearts and minds of those who drive by this church every day. If being discouraged means I've become allied with the minions of Satan by a so-called "faith" in him, then the entire world at some point apostasizes simply by surrendering to human nature. Everyone goes through this as the common lot of mankind, including Biblical figures like David and Job, the apostles' of Jesus' day and so many others. This has never apparently mattered to Faith teachers who unblushingly go on to criticize, insult and deride those who offer any kind of objection to those fantasies they pass off as cutting edge expositions of spiritual reality.

The absurdity of this position is beyond question - it says that to fall to one's human weakness is Satanic. Who will visit a church or accept its' ministry with that kind of thinking brazenly posted outside its doors?


But it gets even better .. well, actually WORSE. What makes this fascinating is that the church WASN'T Pentecostal or Charismatic, but is a large Baptist church, part of an Evangelical movement that claims a fidelity to Scripture and Biblical truth above question. This church's "outreach" sign has a theology that says that to be human and feel disappointment, discouragement and despair is not only unspiritual but is a sign of allegience to Satan himself, thus adding the lowest kind of insult to injury. I guess this church thought this was meant to inspire and edify. Personally, I think it to be arrogantly insensitive and spiritually immature AT BEST .. and it speaks volumes about just how shortsightedly stupid Christian "faith" can seem when trying to make a statement in the marketplaces of the world.


I'm a minister. I believe in the Body of Christ. There's a lot of wonderful and truly inspirational things going on in world missions, discipleship and church growth as well as evangelistic outreach that show that for all of our warts, the Church is indeed still moving forward with the business of the Kingdom of God on the royal road to Heaven. But this nauseatingly sign, however, is a great illustration of how many speed bumps and potholes are on the way .. and how incredibly bad the Church still is at sounding out clear messages to a world that looks to it, sees this kind of junk, and looks the other way. I am sure that is precisely what this church, unintentionally, is doing even as we speak.


agape
Posted by Reverend Rafael at 5:45 AM