Another Sign Of The End Time Apostasy: When Bad Movies About The End Go To The $5 DVD Bin And Beer Commercials Bluescreen It In. 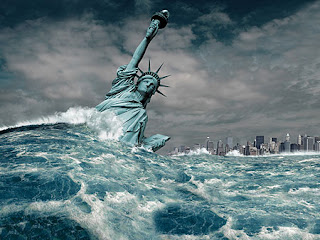 This will be another attempt to try to blog regularly.

I feel awful that between my busy personal life, my work and a lot of other to-dosm I have so much going on locally here that I don't get time to write here as much as I can. The political extravagances we've seen this past week just demanded I plop myself down here at the computer to stir some up. So, if you're following the progress of our research on the website articles, I want to thank you for your patience and emails and support. So here's an update:

Now, back to our blogging here ..

As I see it, one of the sure signs we are actually in the Biblical end times, apart from bad theology on church signs, is when awareness of the coming end of all things has become so widespread it's used for the backstory of television shows and CGI-driven movies put out by Hellywood - I mean Hollywood.  It's when we can contemplate mass global destruction

Themes drawn from an army of screenwriters who offer flashy send ups of the book of Revelation as well as a graphic depiction the end of the world are now a dime a dozen. Humanity has long been given prophetic insight by the Christian scriptures, among other places, that the end of the world is a very real event more known by how many people live ignoring its arrival. Movies about the end of the world got a real spike around the cultural non-event called Y2K that was supposed to spell the end of civilization as we knew it. But they've been long preceded by all kinds of other treatments, from the 1950's science fiction prophecies of alien invasions ("War Of The Worlds") the thirty years of fear of a Cold War nuclear holocaust ("Fail Safe" among them), and even worries about meteor strikes on the earth itself ("Armageddon").

So with the culture's renewed interest in ancient prophecy, from the ramblings of Nostradamus to ancient cosmologies, as well as Biblical prophecy itself  that refers to the utter devastation of the world in places like Revelation 6 , the film makers have to up the ante, raise the unthinkable, and milk these themes for all they can to fill seats with concession chomping and bored movie goers in search of what they know is a cheap thrill.  Movies from the "Dunwich Horror" to "The Omen" to "End Of Days" have horrified and also delighted millions of them over the past 40 years, and have ensured enough of a cash flow that Madison Avenue won't ignore .. and, as I saw earlier this afternoon, are exploiting themselves ..

It shows how jaded, calloused and completely self-deluded we've become. When the end comes, no one will believe it because it wasn't seen on TV or the big screen. Just another bit of slouching to Gommorah.

The real horror of real destruction that visited New York, Shanksville and Washington DC on the morning of September 11, 2001 has been far more urgent, terrifying and life changing. We're already tuned out over that, long ago. A letter to the editor at a newspaper on the eve of the 10th anniversary of that day of infamy couldn't say it any better: click here to read it.

Between Harold Camping's offspring and the Mayan calandar, we'll see more of this. I'm sure.
Posted by Reverend Rafael at 6:09 PM