What Would Jesus Buy? Just In Time For The Holidays! 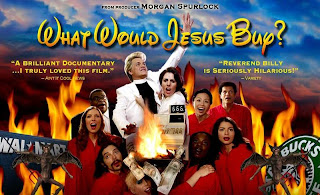 Well, it's Christmas time again. And while I hate to spit in anyone's figgy pudding, it must be firmly noted this Advent season that America is not a Christian nation, becoming more profane and pagan by the day. On Black Friday and every Shopping Day since, millions of Americans are thinking more about Stuff then the Savior the Christmas season is to herald. I assure you, the only opening prayers at the gates of the Big Boxes uttered were that people got in and didn't get trampled to death by the hordes of materialistic people behind them.

If even a fraction of the estimated 60 to 70 billion dollars of discretionary income people pump into the chimera's maw of Christmas shopping was diverted to clothe the homeless, improve a widow's shattered house, or feed hungry people, it might truly be more of a holiday season.

Instead, we lose ourselves in the minutiae of glittery cultural trapping and forget that for much of the rest of the world, where Christians live daily under threat of death or imprisonment in slave labor, Christmas is just a way to line their pockets from the wealth of the distracted West. The packaging becomes the Reason for the Season. Christ is the kid in the manger hidden behind the gaily wrapped Play Station, power tool or Mudd boots.


Merry Christmas.
Posted by Reverend Rafael at 11:55 PM No comments: