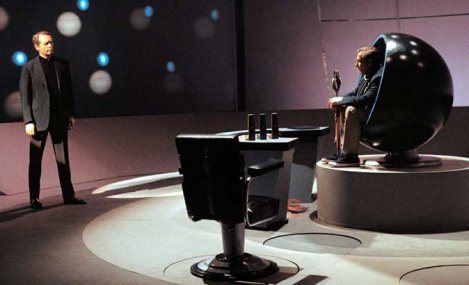 One of my favorite TV shows is the iconic 1967 series "The Prisoner," created and starring the late Patrick McGoohan. I've been a fan since it was shown as a summer series fill in on CBS in 1969. For those of you who never tuned in, the drama revolves around the struggle of a top secret agent to resist the surreal interrogation he is subjected to after being spirited away to a Kafkaesque town called the Village. The Village is populated by other agents who have been captured and broken by its' sophisticated technological and psychological coercion as secret information is ruthlessly stripped from them by their unidentifiable captors and become unwitting instruments they use to compel McGoohan's character to give in to them. He is given a new name and identity, Number Six, and told to answer their questions or be prepared to live the rest of his life there under the threat of having it extracted from them in mind and personality shattering ways.


The whole series' fascinating premise pits Number Six's steadfast resistance against the Village's totalist social milieux as programmed by a variety of Number Twos, men and women who are effectively the warders of the Village who want to get him to talk. It's a great show and perhaps the most innovative and disturbing television series of all time .. and a reverie from it shows indeed how art often can only slickly approximate the all too horrific and real life drama that goes in our world today when the freedom of conscience is challenged.


In one episode, Number Six's resistance to the Village's social order results in him being labelled "unmutual," which is the ultimate anathema that can be pronounced on a Village resident. He is accused of defying the Village's groupthink perspective so disruptively that it destroys social cohesion and harbors a destructive subversion of it's overwhelmingly conformist status quo. He is then forced to choose between submission to their demand or a complete frontal lobotomy of his brain itself. When the whole community physically attacks him and drags him off to a hospital for this to be done, the drama is one of the most terrifyingly unnerving paroxysms of violence in the whole series, because it is done with such faultless civility so as to save the Village from the spread of antisocial "unmutuality."


To harbor such attitudes is also the unforgiveable sin in cultic movements of all persuasions. This is where cultism itself becomes most observable - when no other worldview or valid perspective other than that which is rigidly adhered to be a given organization at the pain of drastically punitive and manipulative social sanctions - anything from being labelled a tool of Satan publically to having one's wife completely abandon you for thinking differently from the authoritarian leadership she and you looked up to.

We'll be looking at examples of what this kind of "sin" looks like in the next few posts .. such as this profoundly disturbing snapshots which you can read at in full in the links for each one ..

In the beginning the church put very few restraints on me and everyone seemed so on fire for God and radical in their devotion. Slowly over time I started to see that what was presented to me in the beginning was dramatically different from what I found myself dedicated and committed to in the end. I found that being a member in good standing was dependent upon unquestioning submission with the church's headship, vision, teachings, and doctrines.


By the time I had a clear understanding of what The Fellowship believed and practiced I felt trapped. I saw no way out short of loosing my friends and living under the curses the church places on ex-members. Read more here.

How does "unmutuality" get addressed? Here's the nice, sanitized version that sounds so pious it seems scandalous to fault it: but the implications are chillingly clear ... this is a quote from the an unofficial Unification Church website that can't be accessed without creating an account with it to access it's writings ..

We need to recognize our wrong/negative thinking habits and reprogram ourselves with correct/positive thinking habits. Let's start with grateful thinking and a habit of report prayer when we can confess and repent and make new determination at the end of each day. That will help us avoid a vicious cycle of self-accusation "guilt-tripping" that saps our spiritual energy and pulls us into depression and despair. Read more here if you want to sign in to look for the complete article.

More to follow ..
Posted by Reverend Rafael at 12:26 AM No comments: