Ruminations Coming: In The Meantime, A Public Service Announcement 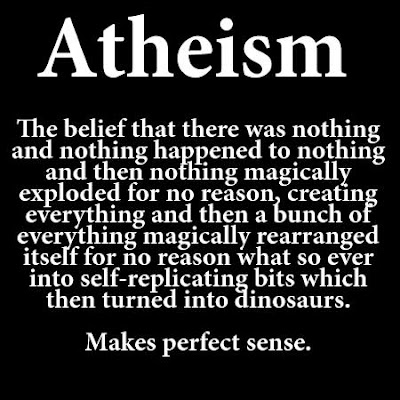 Maybe the term "naturalism" would be more exact. Still, atheism has a long standing affinity with the form of naturalism described above. It's the belief about the natural world that rejects any notion of any kind of higher power having any influence over the observable processes of the creation around us. They scorn the belief of a Creator who creates and then come up with this cock and bull story to solemnly inform us this is the only "provable" explanation for all of physical natural reality as well as ancient natural history itself.

This kind of scientific "theory" is what many of the best minds in the world are convinced explains how the world came to be. No wonder those who question it are viewed as ignorant and unwashed Neanderthals - to admit that truly critical examination of this bizarre fairy tale might have a point to concede would cause the whole house of naturalism's cards to blow away.
Posted by Reverend Rafael at 9:31 PM No comments: