Of Cartridges And Things: The Latter Day Saint Legacy Of Divine Violence 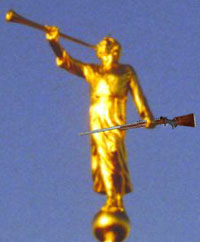 The ongoing occupation of a Oregon federal wildlife refuge's grounds by dissident rancher activists again provides for us an opportunity to look beyond the headlines to the bigger picture behind their protest. The leader of the group, one Ammon Bundy, draws his moral high ground for his actions as much as from deep seated convictions that the federal government has disrupted his livelihood and that of his neighbors as well as an earnest appeal to several generations of Latter Day Saint political pietism in the Northwest.

A recent Religion & Politics column written by Benjamin Park is well worth a read to grasp how such a seemingly harmless faith like Mormonism has provided for Bundy and many of his following a platform to become a rallying point for dissent, even armed conflict:

Even on an issue as crucial as violence, the LDS culture has enough tools at its disposal to construct various, and seemingly conflicting, idols. ..

Indeed, examining the relationship between Mormonism’s tradition and the current standoff in Oregon is a reminder that the construction of political theologies is always an exercise in creating religion after one’s own image.

It's an article well worth the read and shows how quickly the acquired absolutism drawn from one's lifetime in the thrall of an authoritarian group becomes both the potter and the clay in the cottage industry of good old fashioned cultism.

Posted by Reverend Rafael at 6:45 PM No comments: