Did Christianity Cause The Crash? 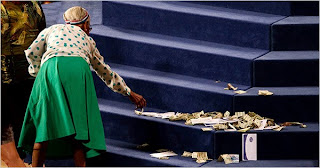 It probably didn't help as much as it should have.
In a allegedly "Christian" land whose financial foundations were supposedly engineered by a historically rigid and pious Protestant work ethic, the religion supposedly serving the Faith of our Fathers seems to show an awful lot of wear in these recessional days. Especially when the Prosperity Gospel is what's being preached from the pulpits of today.

Yes, you heard me and yes, you can give it some thought yourself by checking out this painfully honest and all too illuminating essay here. Frankly, I'm not just outraged, disturbed and angry. I'm just not surprised. Faking it til you make it has reached a whole new level of cultural delusion among the "children of light," which is why the "children of this world" still possess a level of wealth that is supposed to be possessed by confession of those same well-lit King's Kids.
Posted by Reverend Rafael at 9:05 PM 1 comment: