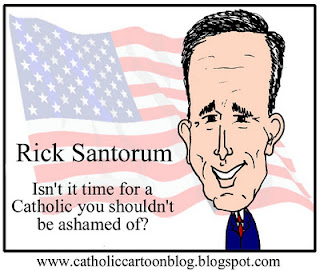 The strange phenemonon of electoral opportunism that is the annual presidential elections in the United States, has taken another one its' patented weird twists among the Republican candidates in a campaign that seen some really bizarre ones.

Recently a clip of a talk given by Roman Catholic and Republican candidate Rick Santorum surfaced in the media. He said this at a 2008 forum with students at Florida's Ave Maria University, founded by Domino's Pizza mogul Tom Monaghan. In it, Santorum essentially dismisses the Protestant Judeo-Christian ethic and Protestantism as being "gone from the earth."

It's a rather revealing look into the mindset of hardline Roman Catholicism as it sees those not under its control. It has once again opened up in public discourse the very real divide between Roman Catholicism and Protestantism itself.

While pundits, talking heads in the media, commentators and others fuss over Santorum's supposed distinction between "mainline" and "mainstream" Protestantism (of which Evangelicals are a part), they miss a big point here. Catholicism doesn't care how Protestants define Protestantism. Those who are doctrinally or practically Protestant rather are fond of the labels, revel in them, and even use them to show how much "righter" we are from others.

But Catholicism doesn't care. The entire Protestant world is under the curse of God for questioning Rome's doctrine and authority. Don't believe me? Google "Council of Trent" and do some reading. Check this church's document tracing how many curses of God that the Roman Catholic institution has placed on anyone who doesn't agree with them .. or this nifty site.

It's hard for Protestants to understand the complete subjugation of independent thinking, dialogue and autonomy of faith in Christian liberty that the culture of hardline Roman Catholicism exerts. You simply can't get the impact of Santorum's statement until you grasp that point. In traditional Roman Catholicism, especially the species that Santorum played to, this has been an unquestioned authoritarianism for centuries. 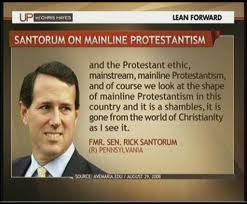 Santorum and Monaghan are among the many Roman Catholic powerbrokers who rub shoulders with all kinds of interesting people - like Catholic cardinals who protect deviant pedophile priests, part of the dark underbelly of Catholic religio-politico social realities no less Byzantine or secretive than those in Protestant ones. Monaghan has the unusual burden of having to explain his close association with a specific Roman Catholic cardinal who has been under grand jury examination in Philadelphia for his collusion with covering up the filthy and abominable deeds of priests who molested children.

The sharp media will start asking questions about the propriety of a Presidential candidate whose worldview INTOLERANTLY (there's the 25 cent PC word) and summarily dismisses Protestantism as a corrupt aberration. I have had toe to toes with RC apologists who said the exact .. same .. thing, and known that is what they truly actually believe because that is what Rome says about it, end of discussion.

Romney is going to get a huge bump out of this one .. but the sharp media will ask about his cult's history of feral rejection of non-LDS Christianity as a "perfect pack of nonsense" itself.

But LDS and Roman Catholic cultism aside, the point is that in this RC worldview Santorum speaks to, Rome is home. Protestants need to submit to it without question or languish under God's curse. Santorum knew his audience and knew the patronage it enjoyed from hard liners like Monaghan, who represent Catholicism at its hard linest: he chose his statement deliberately because it shared in this obviously bigoted worldview.

Never mind that morality in largely Roman Catholic lands across the world is degenerate and spirituality is as nominal/seasonal as always - that Catholics turn up in church only at weddings, baptisms, funerals, Christmastime and maybe at Easter. Never mind that free indulging of sinful pleasure is celebrated in places like Rio's de Janeiro's Carnival and New Orleans' Mardi Gras just before Roman Catholics then put their holiness game faces on and start practicing Lenten sobriety. This is what goes on when Rome is home.
﻿﻿﻿﻿﻿﻿﻿﻿
﻿﻿﻿﻿﻿﻿﻿﻿
The spirituality and morality of Protestantism is under the curse, right? We'd EXPECT, per Santorum, to see it failing. But never the Holy Roman Catholic Church, founded on Saint Peter. Ohh, noooo ..

But - God forbid - the votes of the accursed Protestant electorate get passed over! That would be ... unchristian!

Just when I thought I might have found the least odiferous of candidates I might vote for, I think I will sit this election out. They all stink.