The Lack Of Faith In Rome Is Disturbing: The Pope On Protestant Resistance As Futile 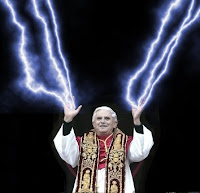 Like never before in the past twenty years, the apologists and faithful within Roman Catholicism have striven for the high road in enjoining Protestants to fellowship and dialogue with them. Hoping to engage them on their "faith journeys," these zealous folk have appealed not only to Protestants of all stripes but to lapsed Roman Catholics who have left the church in an earnest effort to bring them "home" to the fold of Rome. Media campaigns and interfaith initiatives abound from many religious groups from the Bahai to the United Methodist Church to the so-called "Church" of Scientology and these efforts are just one more voice in the marketplace that spirituality in the last days has become.

What is not easily recognized is how long Roman Catholicism has used the efforts of people of every Christian persuasion as a way to do an end run around Protestantism's distinctives, trying to show how such division is an affront to Christ and that to continue to maintain them is so, well, "unchristian." Since 1935, joint efforts by ecumenicists in the Anglican Church and by Roman Catholic leadership have resulted in an interfaith initiative called the Week Of Prayer For Christian Unity which the Papacy has seized on with great zeal over the past fifty years since the end of World War II. The 2011 edition of this weeklong emphasis was summarized on the Catholic Culture website, to wit:

At a January 25 Vespers service closing the Week of Prayer for Christian Unity, Pope Benedict XVI said that ecumenical work is a “moral imperative” for all Christians.

The Holy Father reminded the congregation at the basilica of St. Paul-outside-the-Walls that Jesus prayed for unity among the faithful. That unity, he said, “cannot be reduced to recognizing our reciprocal differences and achieving peaceful coexistence.” The followers of Christ cannot be satisfied until they have achieved full communion, he said.

True Christian unity, the Pope continued, “cannot be realized only at the level of organizational structures,” but must be forged among the faithful, “confessing the one faith, celebrating divine worship in common, and keeping the fraternal harmony of the family of God.”

Hence, the papal demand to unceasingly press for a common "confession" and a "divine worship" as a moral imperative that Jesus prayed for is actually a veiled call for Protestants to cease their resistance and refusal to acknowledge Rome's supremacy. Roman Catholicism has historically called curses in the name of God upon anyone who doesn't toe its line and submit to its authority and until the Papacy recognizes and apologizes to Christian conscience itself for engaging in such blood thirsty fulmination, any discussion of "unity" with Rome is little more than hot air. Renouncing the anathemas called down upon Protestants at the Roman Catholic Council of Trent would be a nice place to start but it hasn't happened. So for a variety of dunder headed Protestant ministers and theologians to go for a ride with Roman Catholic figures working to turn their movements into subjects of Rome again is just one of the many signs that the apostasy of the last days, the "mystery of iniquity doth already work."

In a day in which the faith which Christ preached, died and rose again for is continually revisioned as being the exclusive province of Church A or Church B, it is not difficult to see just how much the Catholic Church has become another multinational organization fighting for market share in a deathmatch with the encroaching influences of Evangelical and Protestant missions efforts confronting it globally. Catholicism has long found itself under siege on all religious fronts, finding its priesthood, polity, tradition and rigid obedience to the Papacy increasingly tuned out by more and more Roman Catholics itself, let alone those outside it's fold.

Interestingly, for all of its labors, it would seem that Mother Rome isn't finding much success for its fruit: in the National Councll of Churches' annual Yearbook of American and Canadian Churches, we find that the cultic Mormon Church and the Pentecostal movement the Assemblies of God enjoyed almost the exact rate of growth in the United States in 2009 as the Roman Catholic church itself did. For such radically missionary and evangelistically oriented movements to set forth such sluggish growth rates, however, raises far more questions than answers about the advance of Christianity in the last days - namely what Christianity is being seen as in America, and why movements supposedly energized by the Spirit of God barely are keeping ahead of U.S. population growth of 0.9 %.

An excellent article on the heavyhandedness of Roman Catholicism's attempt to define Christianity by it's own monolithic denominational self-identity make itself the chief deserves some consideration. You see, the whole point of an apostasy is to fall away from the original pattern of belief or faith and Roman Catholicism, being the corrupt and apostate church that it has become by abandoning Biblical faith, is surely one of the greatest leaders of apostacy today.

Why is Roman Catholicism unbiblical? Click here to read why from one powerful voice, who, while long gone, still speaks today.
Posted by Reverend Rafael at 2:08 PM No comments: