The End Time: Still On Schedule Even Though I Have Not Been There Myself

It is better to learn late than never at all.   Publilius Syrus


Life does come at you pretty fast sometimes. There's much in one's personal transitions during the ebb and flow of life that can consume you so very much that whatever you've set up before as a priority suddenly gets torn down again by a newer or greater one. Change is the one constant of life, from deaths to births, from revisioning to scrapping, from relationship to relationship. Whether you a believer or an atheist, whether rich or poor, whether Asian or African and no matter where you live in the great human continuum of existence, we all face the lightning strokes of personal change and the uncertainty it brings, followed by sometimes purposeful and often frantic scrambling to react and/or respond to it. 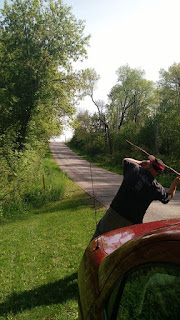 Such has been 2016 for me and my house. I am now an associate pastor at the Crossroads Church at first in Lynwood, then in Sauk Village, Illinois where I serve to help shepherd, care and grow the flock under the senior pastorate of James Schulker.  Last year was one of the greatest years of transition in both churches - while we were just starting to get our ministerial launch in Lynwood, the Sauk Village Church of God invited us to combine with them to create a new congregation. Both congregations agreed and the Crossroads Church of God was born in August, where my wife and I have served ever since and our first year anniversary is coming up. Since then our ministry has kept us quite engaged on a local church level and we anticipate deepening levels of it to come, to the glory of God in Christ by His Spirit. It would take a whole post in and of itself to discuss how I've gotten to this point .. but we know one thing. Elizabeth and I are here for this place, at this time, and for the building of the Kingdom of God.

This blog has been about discussing how the end times apostasy in our world spreads and continues to deepen and deceive.  You may now understand why I've not had time to do much with it at all for over a year, after repeated relaunching to keep it current over the years, despite my desire to keep blogging.  Time is now at an absolute premium. My calling as a pastor now is asserting itself, my long standing desire and passion, and while my calling to be also an apologist and countercult activist remains the same, it is the priorities that are now changing. This has been ongoing since 2013 and it is where He has been leading.

But Spiritwatch Ministries and this blog will continue and must remain. The ongoing rebellion of humanity against its Creator as its time is about to be overshadowed by prophetic judgment must be foremost in a truly informed person's mind when considering the days ahead. Somehow, someway, I will now continue to blog about this fallenness, about the dark days ahead because it is certain that the days are indeed getting more troublesome and uncertain. In such a time as this, the Gospel of Jesus and a living hope in Him that is an anchor of the soul are the eternal standards that will stand all change that chaos seeks to impose. Spiritwatch Ministries stands firmly upon that!

We're still going to do as we have, here in the Chicago metro area and Northwest Indiana. We're still counseling victims of spiritual abuse, still witnessing to cult members, still tracking apostacy, still consulting with pastors, still keeping the websites up and the prayers going on. Every Tuesday, at our church, I lead a weekly prayer meeting for our world with emphasis on the cultic groups and apostate elements in our culture that need prayer for conviction, for deliverance and for truth. We're not giving up .. just again reprioritizing again in the midst of change! Thanks for your patience and attention, folks! Pray for us! We'll be blogging more next week!
Posted by Reverend Rafael at 9:34 AM